The queerstioning symbol was created by me in order to have a symbol that is not specific to gender or orientation questioning, and that doesn't have a rainbow in it, referencing being (possibly) queer first and other things second.

This symbol can be used by:

Note: I'm using queer here as a catch-all for people who deviate from society's expectations of attraction, gender and related things (this includes intersex people if they want to). I am not advocating for people to be called queer if they don't want to, even if they fit this definition. Queerstioning is for people who feel like they are or could be represented by the word queer, and I acknowledge that not everyone who is questioning wants to use queer as a word for their current and/or possible LGBTIAPN+ identities.

Here is a smaller version, which is probably more appropriate for icons and such: 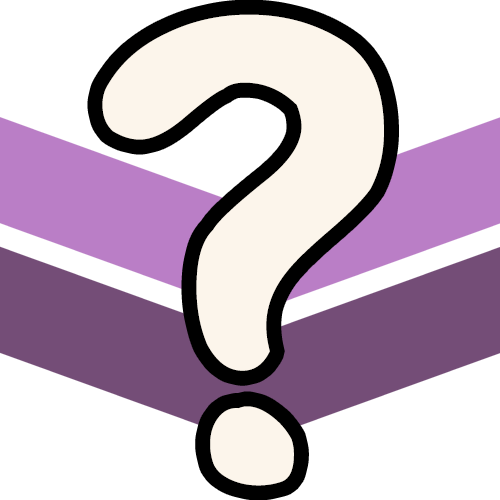 And here is an even smaller version, which is for emojis and such:

The font used for the emoji version is called MelodBold. It's free for personal use, but since it's not free for commercial use, I don't think it's approppriate to use it for the bigger icons, which might be used to sell shirts someday or something like that. The bigger versions use a font called Conformity, which is also a cute round font, except this one is free for both personal and commercial use.

But like... as long as it is a question mark in front of the queer chevrons, it's pretty much the same concept, so feel free to create "alternate" queerstioning designs if you feel like it. You can even contact me (if you know how to *wink*) so I link to your designs here.